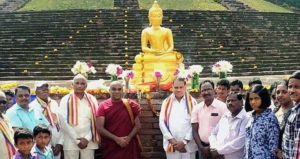 The four-foot tall structure was imported from Thailand

The ASI Museum campus includes a Buddhist stupa, which is 30 km from Machilipatnam.

“The Dhyana Buddha statue, four feet in height, is gold-coloured and has been imported from Thailand to be installed at the Ghantasala Buddhist stupa, one of the sacred places for Buddhists in the State. We preferred the Thailand sculpture style for the Buddha statue due to its unique craft,” Mr. Dhante Dhamma told The Hindu. The statue has been unveiled after performing a ritual by offering lotus flowers. The Ghantasala villagers conserve the lotus flowers in the village pond. In Buddhism, the lotus is regarded as sacred, and symbolises purity of mind and body. Villagers joined the ritual and offered prayers under the aegis of Mr. Dhante Dhamma.

On the status of the ongoing project of developing a Buddhist vihar on the outskirts of Ghantasala village, Mr. Dhante Dhamma said that the construction of the 112-feet height of Buddha statue and the monastery was under progress. Mr. Buddha Prasad, along with village elders who are followers of Buddhism proponent Gorripati Ramakrishna discussed ways to promote the Buddhist site as a tourist attraction in Krishna district.