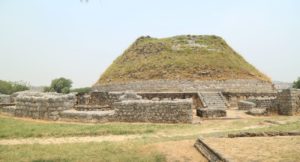 The ancient Buddhist city of Taxila was one of the most important cities of the Subcontinent and was lost for thousands of years.

Located in what is today Pakistan, Taxila was an important city of ancient India and the center of a once-great Buddhist civilization. Today it is regarded as one of the subcontinent’s treasures. Pakistan is a country few visit – often because of a poor safety reputation. But it is a country of contrasts and those who do visit are quick to fall in love with the stunning South Asian country.Pakistan boasts fantastic food, ancient history, and some of the world’s tallest and most difficult to ascend mountains. If one is going to Pakistan, then one of the most dramatic and eye-widening attractions that can be seen in the country is the massive Gadani ship-breaking yard.

History And Importance Of Taxila

Taxila is in northern Pakistan around 30 km (20 miles) north of the capital of Islamabad just off the famous Grand Trunk Road. The city was an important Buddhist center between the 5th century BC and the 6th Century AD. In its day it was a major junction connecting South Asia with Central Asia.

Name: Taxila or Takshashila (“City of Cut Stone” or “Taká¹£a Rock”)
Flourished: Between the 5th century BC And The 6th Century AD

Taxila was founded around 1,000 BC with some ruins dating back to the time of the Persian Achaemenid Empire (the empire that invaded Greece and fought the 300 Spartans).

The Achaemenid Empire was followed in Taxila by the Mauryan Empire, Indo-Greek, Indo-Scythian, and Kushan Empire periods. These and other empires vied for control of the city due to its important position on great ancient trade routes.

But all good times come to an end at some point. The city lost importance when the trade routes collapsed or were rerouted and it was finally destroyed by the nomadic Hunas in the 5th century (around the time of the fall of the Western Roman Empire).

The long lost city was only rediscovered by the famous archaeologist Sir Alexander Cunningham mid-19th century. In the early 19th century, it was not known where Taxila that a number of ancient Indian texts were mentioned, and a number of sites were considered. The lost city of Taxila, however, was not identified until 1863-64.

Taxila was among the first sites to be granted World Heritage status in 1980 and is today one of the top-ranked tourist destinations in Pakistan.

When visiting the site, plan to spend time discovering the Taxila Museum as well. Browse a great collection of Gandharn Art (a blend of Greek and Buddhist art). See a rare collection of utensils, jewelry, toys, and pottery and learn about the daily life of the people of ancient Taxila now long gone.

Visitors: Taxila is Visited by Around 1 Million People A Year

To get to the site, one can easily hire a taxi from Rawalpindi or Islamabad – although it may be better to hire a local taxi from Taxila who is familiar with the sites. One option is to take a taxi to the museum and then get a local taxi from there.

The ruins and structures of the massive network of archeological sites are spread over a vast area of around 25 km2 in and around the modern town of Taxila. That being said, most of the main buildings and sites by close to the museum building. Most of the sites are easily accessed by road and are well marked.

Taxila is located in Pakistan and everyone going to the country will need to plan ahead and get a visa before flying. Most Western passport holders (including the United States, Canada, and the United Kingdom) only require an electronic travel authorization (ETA) before traveling to Pakistan for tourism.

Visa: Need To Get An Electonic Travel Authorization (ETA) Before Travel

It should also be noted that as of April 18, 2022, the U.S. Department of State categorizes Pakistan as Level 3 – “Reconsider Your Need To Travel.”