Lumbini, located across the border from Gorakhpur in Rupandehi district of Nepal’s Lumbini province, is believed to be the birthplace of the Shakya prince Siddhartha Gautam, who became The Buddha after attaining Enlightenment. 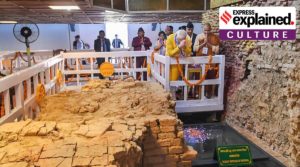 Prime Minister Narendra Modi and his Nepalese counterpart Sher Bahadur Deuba together laid the foundation stone for the India International Centre for Buddhist Culture and Heritage in Lumbini, Nepal, birthplace of The Buddha, on the occasion of Buddha Jayanti on Monday (May 16).
Lumbini Garden

Lumbini, located across the border from Gorakhpur in Rupandehi district of Nepal’s Lumbini province, is believed to be the birthplace of the Shakya prince Siddhartha Gautam, who became The Buddha after attaining Enlightenment. The Lumbini complex contains a number of holy sites, including the famous Mayadevi temple, which is dedicated to The Buddha’s mother. Adjacent to the temple is a sacred pond in which Mayadevi is believed to have taken a ritual bath before giving birth to Siddhartha.

Lumbini Garden is described in Buddhist literature as a Pradimoksha-vana (sin-free forest), containing groves of sal trees, beautiful flowers, birds, and natural landscapes. It was built by Anjana, king of the Koliya clan, for his queen Rupadevi or Rummindei, pronounced “Lumindei” in the Magadhi language, hence the name Lumbini, according to some historians. (Others believe the name was given by the emperor Ashoka later.)

The Koliya were bound by matrimonial alliance with the Shakya clan of Kapilavastu, and jointly managed the garden. Mayadevi, who was the daughter of king Anjana, was married to the Shakya king Suddhodana.

According to Buddhist literature, Lumbini was located on an ancient trade route passing through Kapilavastu (present location uncertain), Kushinagar (in modern-day Uttar Pradesh), and Vaishali, Pataliputra, Nalanda, and Rajgriha (all in today’s Bihar). There were shops, eating places, and resthouses for both the elite and common people along the route.
Siddhartha’s birth

According to Buddhist legend, Mayadevi was passing through a grove of sal trees in Lumbini on her way to Devdaha from Kapilavastu, when she began to experience labour pains. The baby is said to have emerged from her armpit, and announced that this would be his last birth and that he would not be reincarnated.

The birth of the Shakya prince Siddhartha Gautam is dated to 563 BC (480 BC according to some traditions). He is believed to have died aged 80 in 483 BC (or 400 BC). In 249 BC, the emperor Ashoka erected a pillar marking the place where the Buddha was said to have been born.

Buddhist tradition has it that the ascetic seer Asita visited Kapilavastu during the birth celebrations of Siddhartha. Upon seeing the child, Asita announced that he would either become a great king or a great religious teacher.
Renunciation

Siddhartha’s father Suddhodana wanted him to become a king and shielded him from sorrow, unhappiness, and any experience of death. The prince was brought up in the royal palace amid every worldly comfort and luxury. However, he grew increasingly dissatisfied, and on one occasion saw an old man, a sick person, a corpse, and an ascetic, which moved him deeply.

One night soon afterward, when Siddhartha was 29, he went out of the palace, leaving behind his wife and newborn son, and accompanied only by his faithful charioteer Channa and horse Kanthaka, to live the life of a wandering ascetic. This event is known in Buddhist tradition as the Great Renunciation.
Enlightenment

At age 35, Siddhartha Gautama began to meditate under a Bodhi tree on the outskirts of the town of Gaya, situated in the realm of Bimbisara, the king of Magadha. On the 49th day of continuous meditation, he is said to have achieved Enlightenment and understood the cause of suffering in the world. Siddhartha became The Buddha, the Enlightened One.

Bodh Gaya is today one of the four great Buddhist pilgrimages, the others being Lumbini, where The Buddha was born, Sarnath near Varanasi, where he gave his first sermon, and Kushinagar, where he died (or attained Mahaparinirvana). The Buddha was greatly attached to Lumbini and visited the site, along with Kapilavastu, on several occasions during his lifetime, according to the Mahaparinibbana Sutta. While on his deathbed, he is said to have advised his followers to visit Lumbini, along with the other three holy sites.
Historical site

Cultural deposits dating to the 6th century BC have been discovered at Lumbini. The Chinese monks Faxian (Fa-Hien) and Xuanzang (Huien Tsang) visited the site in the 5th and 7th centuries AD respectively, and their accounts were used by antiquarians in the 19th century in an effort to locate Lumbini.

The 3rd century BC was a watershed moment in the history of Lumbini and Buddhism. After witnessing the massacre in the war of Kalinga, the emperor Ashoka converted to Buddhism and committed himself to promoting the spread of the religion. He visited Lumbini, and in 249 BC, built a large temple-like structure over the birthplace of Buddha and erected a sandstone pillar containing inscriptions to memorialise his pilgrimage.

A portion of the pillar survives today, with 4 metres below the ground and 6 metres above. Descriptions of travellers suggest the original pillar was several metres taller, with an inverted lotus capital and an animal image on top, according to historians.

The inscription on the pillar, in the Brahmi script of the language Pali, says Ashoka prayed at the birth site of The Buddha, and that pilgrims would be exempt from all religious taxes. In 1312, the Khasa-Malla king Ripu Malla engraved the Buddhist mantra, ‘Om Mani Padme Hum’ and his name on the pillar. However, Lumbini was forgotten for many centuries, until it was rediscovered in 1896, and excavations were conducted at the site.