More than 200,000 people have flocked to Ghosts and Hell: The Underworld in Asian Art at Tainan Art Museum, which unites Chinese jiangshi vampires, costumes from a Thai ghost festival and the wandering female spirit of Southeast Asian folklore.

On a Thursday morning at the end of September, lines are already out the door at the Tainan Art Museum in southern Taiwan. Many of the museum-goers skew young, and they appear excited to see one exhibit in particular – Ghosts and Hell: The Underworld in Asian Art.

Even before the exhibit officially opened in June, it was clear it was going to be a success, with images of its Chinese “zombies” display going viral online, generating 101,000 Facebook “likes” and 51,000 comments. Three months in, the museum has sold more than 200,000 tickets with final numbers to be tallied when it closes on October 16.

Special ticketing arrangements have been in force to ensure visitors get equal opportunity to wander through the “gates of hell” or examine amulets to ward off evil spirits.

“I think it’s [so popular] because in our childhood, we watch a lot of horror movies from China, or Hong Kong or Japan, and we have a huge emotional connection to zombies,” says Chi-Lien, a member of the museum’s education department, as he takes HKFP around the exhibition. “Most people found it very cool that this was the first time they could see such things in an art museum.” 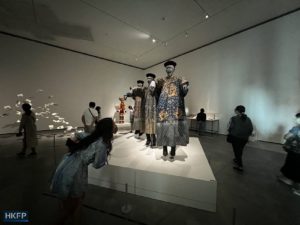 The zombies, museum exhibition designer Chen Han-yang later explains, came from the Chinese custom of “corpse walking” to help bring the dead home. In places like Hunan, a mountainous province in southern China, carrying the bodies was challenging.

Transporters would tie them upright with their arms attached to bamboo poles – which made them look like reanimated corpses walking with outstretched limbs. The practice would enter folklore – and later horror cinema — as a jiangshi vampire zombie.

Many of the items from the show come from the Musée du Quai Branly – Jacques Chirac in Paris, which originally commissioned the exhibit back in 2018. Tainan Art Museum has added nine pieces from Taiwanese artists and another 16 from other local museums and private collections. For this reason, the Tainan exhibition is more East Asian than its original version, with the additions bringing a greater sense of terror.
Gates of Hell Tainan Art Museum

One of these newly commissioned mixed media pieces, Hell by Taiwanese artist Yan Chung-Hsien, greets visitors to the exhibition with a Dante-like entrance. On the wall behind a seated deity are the the words: “Here you are.” The sound of bees echoes in the entryway from an unsettling video installation nearby, also entitled Hell, depicting creepy shots of religious objects and temple displays.

“It’s kind of like the last judgment. There is the god Yan Wang who is going to judge you: what you have done, before when you were alive, now he needs to see if you are a good person or not,” according to Chiou.

The theme of judgment is everywhere in the exhibition, which features rare historic paintings depicting the 10 kings of diyu, the Chinese version of hell, as well as a vision of its Buddhist counterpart, Naraka, by contemporary Thai artist Preecha Rachawong. 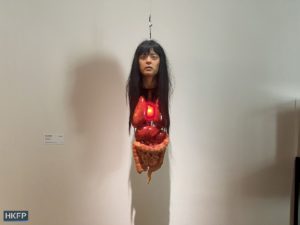 These make way, in turn, for artwork themed around wandering ghosts, from Japanese woodblock prints of mournful female spirits to a terrifying sculpture of the krasue or ahp – among other names – of Southeast Asian folklore embodied as the floating head of a woman connected to dangling internal organs and nothing else below.

The exhibition gets lighter as it moves through later rooms, with more playful examples of Thai and Japanese horror film posters, visually lighter and less terrifying artwork, and a stunning ceramic sculpture of joss paper seemingly floating in the air by Taiwanese artist Hou Chun-ting. Other highlights include rainbow-coloured costumes and masks from northern Thailand’s Phi Ta Khon ghost festival, which are beautiful albeit unsettling.

Both informative and visually arresting, the exhibition has captured something of the Taiwanese spirit. The island has long loved a good ghost story or scary film as seen in the recent success of Netflix’s Incantation or 2019’s Detention, which drew inspiration from Taiwan’s authoritarian past as much as its ghost culture.

Exhibition designer Chen speculates visitors may also have been drawn to the Tainan Art Museum as anti-epidemic measures began to subside over the summer, just in time for school holidays. The museum, which opened in late 2018, is also conveniently situated by other hotspots in Tainan, the cultural capital of Taiwan and home to remnants of 17th-century Dutch and Chinese colonisation efforts.

Indeed sitting outside Ghosts and Hell, among the clusters of youngsters, HKFP speaks to a group of grandmothers who were in Tainan for the day from the southern port city of Kaohsiung to see the exhibit. One woman surnamed Huang, said that she originally had no interest in the show until her grandson convinced her to visit, even though she usually prefers historic spots like the nearby Dutch fort at Anping.

“The kids all find this more interesting, older people just see them as worship or prayer items, we’re not as interested,” the woman said, adding that she was less afraid of the exhibit’s amulets and masks because she identifies as Christian.

Another visitor, Navi Wu, who identifies as indigenous Paiwan-Taiwanese, told HKFP she visited the exhibit after viewing another show on Canadian and Taiwanese indigenous art on the museum’s lower level.

Wu said she could see many parallels between Japanese and Taiwanese ghost culture, which absorbed 50 years of influence during Japanese colonial rule from 1895 until 1945. “I think Japanese culture is interesting, and its culture is similar to [that of] Taiwan,” she said.

“The ghosts are quite interesting, but they can be destructive.”