Some of the earliest known statues depicting the Buddha have him in startling costume—draped in the lushly folded fabric of ancient Greece or Rome. Sometimes he has Greco-Roman facial features, naturalistically rendered and muscled torsos, or is even shown protected by Hercules.

Many of these striking Buddhas hailed from Hadda, a set of monasteries in modern-day Afghanistan where Buddhism flourished for a thousand years before the rise of Islam. Located on the Silk Road, the area had frequent contact with the Mediterranean—hence the Buddha’s Hellenistic features. One of the richest collections of this unique art from Hadda was destroyed in 2001, when the Taliban ransacked the National Museum of Afghanistan and shattered the museum’s Buddha statues.

Nearly two decades later, the museum’s conservators are working with the University of Chicago’s Oriental Institute, one of the world’s foremost research centers on the civilizations of the ancient Middle East, to bring the collection back to life. Supported by cultural heritage preservation grants from the U.S. Embassy in Kabul, OI researchers, along with Afghan colleagues, are painstakingly cleaning, sorting and reassembling statues from the more than 7,500 fragments left behind, which museum employees swept up and saved in trunks in the basement.

“When they were broken, we lost a part of history—an important period of high artistic achievement—which these objects represent,” said Mohammad Fahim Rahimi, director of the National Museum of Afghanistan. “They are the only pieces remaining from the archaeological sites; Hadda was burned and looted during the 1980s, so these pieces at the museum are all we have left. By reviving them, we are reviving part of our history.”

The statues are beautiful, by all accounts. First excavated by French archaeologists in the 1930s, and spanning 500 years of Afghanistan’s history between the first and sixth centuries A.D., they are an example of a rare art form unique to the region, often called the Gandharan style. Some stand alone and others in tableaus, ranging from life-size to others that can fit in the palm of a hand. But the task of reconstructing them is more than a puzzle.

The materials these ancient artisans used were primarily limestone, schist and stucco—which tend to crumble and disintegrate under duress, rather than simply crack. “It’s more like trying to assemble pieces from 30 different jigsaw puzzles that have all been dumped together—without the pictures from the boxes,” said Gil Stein, professor at the Oriental Institute and a leading expert on the rise of social complexity in the ancient Near East.

Stein heads the project, which is part of the OI’s ongoing work with the National Museum of Afghanistan Cultural Preservation Partnership. Begun in 2012, the partnership has helped restore the museum’s infrastructure, including developing a bilingual database to document the first full inventory of the museum’s collections, as well as training conservators in the latest techniques for preserving and restoring objects.

The collection is largely from the Hadda monasteries located in northwestern Afghanistan, near the modern-day city of Jalalabad. The region’s warm climate fosters citrus and pomegranate trees and helped it blossom as a center of trade on the Silk Road for centuries—thus its art influenced by both East and West.

Alejandro Gallego López, the OI’s field director in Afghanistan, explained the process of restoring the statues. First is to assess the collection—identifying and classifying features, such as archaeological motifs, and visible parts of bodies, like legs, heads or arms. This census can help them estimate how many objects there were originally (they think it was between 350 and 500).
A nearly full pieced-together statue compared to an older photo when it was intact
Courtesy of the Oriental Institute

Each piece is photographed and then carefully treated with the latest preservation techniques by Fabio Colombo, the OI’s head conservator in Kabul. Next they’re sorted by color, texture and mortar. “Then starts the big puzzle,” Gallego López said.

Some of the objects have inventory numbers from the 1960s and ‘70s written on them, so they can try to match them with remaining records. Most of the museum’s records were lost during a fire in Afghanistan’s civil war, but earlier this year, they discovered a trove of overlooked records hidden in an old office, which contained photos and numbers of artifacts. By a stroke of luck, the surviving cards happened to focus on the Hadda collection.

So far, Gallego López said, they’ve been able to reassemble about 50 statues; he hopes they will have about 150 in the end.

“It’s really exciting work, especially when you can get a few different pieces together,” he said. “It’s very rewarding to bring them back to life.”

“It’s more like trying to assemble pieces from 30 different jigsaw puzzles that have all been dumped together—without the pictures from the boxes.”

Gallego López and Stein are similarly happy that Afghans—both at the museum and the public—will be able to fully appreciate and preserve their history. “This rich cultural heritage belongs to the people of Afghanistan,” Gallego López said. Stein agreed: With the training and database in place, the National Museum will be equipped for the future. “Foreigners and grants come and go, but they’ll still have the knowledge,” he said.

Since its founding in 1919, the OI has conducted field-defining research across the Middle East, including excavations and field projects, linguistic research deciphering ancient languages, creating comprehensive dictionaries, reconstructing the histories, literatures and religions of long-lost civilizations, and preserving the region’s imperiled cultural heritage. Much of this research is on display at the OI Museum, located on the UChicago campus and home to the largest collection of ancient Middle Eastern artifacts in the United States with 350,000 objects. 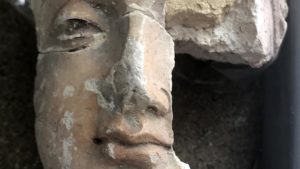