In the year 680 CE, shortly after the Buddhist teachings had started to take root in Japan, the 40th Japanese emperor, Tenmu (r. 673–86), was worried for the health of his consort and commissioned the construction of a Buddhist temple as a prayer for her recovery. The temple was dedicated to the Buddha of Healing, Bhaishajyaguru, the “Healing Teacher,” known in Japan as Yakushi Nyorai. Tenmu’s consort recovered and went on to become the Empress Jito after Tenmu himself died in 687, and she completed the construction of Yakushi Temple, or Yakushi-ji, several years later. In the eighth century, the temple was dismantled and rebuilt in the new capital Nara, where it was named one of the Seven Great Temples of the region. Its main deity, Yakushi, initially became the Medicine Buddha to the upper classes, but within a century or so, much of the population turned to this deity to heal sickness and disease. 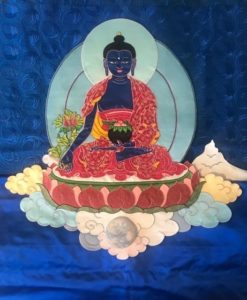 Yakushi or Bhaishajyaguru, who is also known as the Medicine Buddha, is unlike other deities in the Buddhist pantheon. While there many manifestations of the Buddha and other deities to whom followers can turn for help with their spiritual healing and growth, Bhaishajyaguru is the only deity believed to not only cure spiritual ailments but also to heal physical illnesses. He is believed to have made 12 vows as a bodhisattva, including vows to heal beings born with deformities, illness, or other physical suffering, and to help those suffering from sickness, mental afflictions, hunger, thirst, poverty, oppression, cold, and even mosquitoes. Over the centuries, Buddhists in Central Asia, Tibet, China, Korea, and Japan in particular have called upon the Healing Buddha to cure their illnesses, either by praying directly to images of the deity or by rubbing sculptures on the parts of his body relating to their own particular ailment.

In Buddhist imagery, the Bhashajyaguru’s healing powers are suggested by various aspects of his appearance. Like most buddhas, he is usually depicted seated on a lotus throne and surrounded by halos, suggesting his advanced spiritual power. In some representations, such as the Yakushi sculpture at Yakushi Temple in Nara, there are seven smaller seated buddhas shown within the halos, alluding to certain Buddhist texts that claim that he was one of Eight Medicinal Buddhas who created medicinal plants and presided over the Buddhist realms. In most paintings and sculptures, Bhashajyaguru holds his right hand in the abhaya, or fearlessness mudra (as in the printed temple souvenir here) or the bhumisparsha, or earth-touching mudra, as in the Tibetan thangka from the Gallery of New South Wales. However, in some images, such as the pieced-silk thangka above, his right hand is open in the varada, or gift-giving mudra, and also holds a myrobalan—a five-sided lemon-like fruit with medicinal properties. In most images, his left hand rests upon his lap with the palm facing upward holding a small medicine jar or a bowl containing medicine or medicinal fruit.

Although Bhaishajyaguru may be depicted with the golden skin of a divine being, he is also often rendered with deep blue skin. The color is a reference to the Eastern Buddhist Paradise over which he presides, which is known as Vaidurya-pravhasa (Lapis Lazuli Paradise), after the semi-precious stone that is also thought by many to possess healing qualities. Residing with him in this paradise are two bodhisattvas, who are often depicted flanking him, particularly in Japanese images. The deities are Suryaprabha (Japanese: Nikko, the “Splendor of the Sun”) and Chandraprabha (Japanese: Gekko, the “Splendor of the Moon”). In other representations, Bhaishajyaguru is accompanied by the Twelve Heavenly Generals, each representing one of his vows and one of the 12 calendar months.

In each of the Buddhist cultures where Bhaishajyaguru has been revered, he has been considered one of the most powerful and important buddhas in the Buddhist pantheon. Not only have temples been built in his honor, but he has been represented in sculptures, paintings, and prints, and worshipped by people of all classes, undoubtedly because, while not all people are aware of spiritual ailments, sickness and physical pain and suffering are universal. Unlike most other buddhas and deities, who offer followers spiritual healing and the promise of rebirth in his paradise, or aid in the pursuit of release from the cycle of rebirth, the Medicine Buddha has long offered something more material, immediate, and tangible—relief from suffering, pain, and sickness in this life.

California-based artist Leslie Rinchen Wongmo, who created the pieced-silk thangka of the Medicine Buddha above, has again turned her focus to Bhashajyaguru. “I’m working on another Medicine Buddha now, one that has been waiting five years for me to finish it,” she reveals. “I think it’s finally time.” Although she has completed the figure of the deity, she is still working on the background. Just below his lotus throne, she has placed a sphere. “I am offering the Earth to the Healing Buddha,” she explains. At times like the present, when protection from illness and the hope of global-scale healing are on all of our minds, it is easy to understand why Bhashajyaguru has been such a beloved deity for so long and why so many followers still turn to him for solace and salvation.