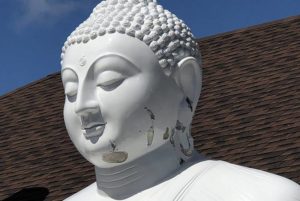 Members of a Heron Road Buddhist community say they are fearful after a statue of the Buddha was vandalized for the third time.

On the wood was written the First Commandment from the Bible: Thou shalt have no other gods before me.

Police confirmed they were called to a mischief complaint at the monastery Wednesday.

“This is the third time and the whole Buddhist community is threatened by this — it’s not only vandalizing a statue,” Jinananda Thero said.

“It is an uneasy feeling.”

A Buddha statue at the Hilda Jayewardenaramaya Buddhist Monastery was decapitated by a vandal in March 2018 and then damaged again several months later in May after the monastery had raised $7,000 to install surveillance cameras. In that second incident — as in the third — the footage was given to police.

In the May 2018 incident, a man was charged with mischief but acquitted April 8 after a trial.

On Wednesday, a monk noticed the piece of wood on the ground, then saw the most recent damage, which is to the Buddha’s ear, late morning. They checked video footage and saw a person had struck the statue, which came from Sri Lanka as a gift to the monastery and is valued at $8,000, at about 1:30 a.m.

The fear is that vandalism could escalate to physical threats against members of the community, said Jinananda Thero, who teaches meditation and mindfulness to local school children and said the monastery tries to render service to the broader community which has welcomed them as immigrants.

“We are a peaceful community,” he said. “Canada is a peaceful society, Ottawa is a beautiful city with beautiful people. We just want this not to happen again.”

Jinananda Thero even wishes for peace for the vandal.