CHENNAI: A ruined granite Buddha sculpture dating to 11th Century AD was found among two Lord Vinayaka idols under a peepal tree in Pallipalayam, a remote village in Ariyalur district. A team led by Buddhist expert B Jambulingam identified the sculpture which was unearthed during the construction of the nearby Pandyan lake 15 years ago.
No one, however, knew the importance of it and it eventually became part of the Hindu style of worship. 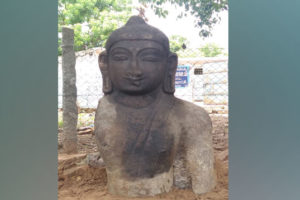