The objects along with hundreds of others from various countries were put on show at the three-month exhibit titled “The Splendor of Asia: An Exhibition of Asian Civilizations”, which opened its doors to the public on July 13 at the National Art Museum of China in Beijing.

“15 pieces of historical-cultural artifacts exhibited at ‘The Splendor of Asia’ were flawlessly returned home,” CTHN quoted Jebreil Nokandeh, director of the National Museum of Iran, as saying on Wednesday.

The Iranian objects, dating from Achaemenid era (550-330) to Safavid era (1501–1736), included clay works, inscriptions, sculptures and glassworks, which represent the [long-lasting] relationship between Iran and China.

The major exhibit, which came to an end on August 11, offered visitors a journey across the vast lands of the continent and travel through its long history by presenting 451 cultural relics from 49 countries.

“Such a large number of top-level exhibits and participating countries have never been seen before in one exhibition in China,” according to Guan Qiang, deputy director of China’s National Cultural Heritage Administration.

Currently, a collection of centuries-old celadons, which are on loan from the National Museum of Iran, are on show at Beijing’s Palace Museum that is hosting a vast exhibit of such potteries from several countries.

The National Museum of Iran is somewhat chock-full of priceless relics that represent various eras of the country’s rich history. Massive and tiny statutes, ceramics, potteries, stone figures, bas-relief carvings, metal objects, textile remains, rare books and coins are amongst objects that build up the innumerable collections inside.

Asia is home to the largest area, population and most ethnic groups in the world. It is the birthplace of Mesopotamian, Indian and Chinese civilizations. 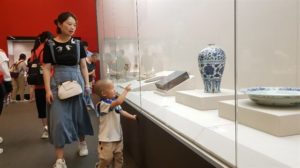