Q: Why is it that pictures of the Buddha look so different from one another? In most pictures or statues, he is quite a plump guy and in others he is absolutely emaciated.

A: Today’s question comes from a local graduate student, and it calls to mind the proverb among scholars that, “If the Buddha of Japan were to meet the Buddha of India, the two men would not recognize each other.” Of course, part of the reason why depictions are different is that they come from different national artistic traditions. This author has seen African crucifixes with a black Christ and European crucifixes with white Christs, depending on who made them. However, with Buddhism, there is a little more to the matter than this.

Siddhartha Gautama was an Indian nobleman living in the fifth century B.C., in the north of that country. Sometime in the sixth century B.C., after deep inner searching which involved severe fasting, he achieved enlightenment, an escape from the endless cycle of birth and rebirth of reincarnation. When other monks asked him what had happened to him, he replied, “I am awake.” The word for “awakened” was something like “Buddha” and the name stuck. It was after this enlightenment that the Buddha began his lifetime of preaching and teaching the path he had discerned. What he actually experienced is another subject which would require more pages, but to answer this question it is important to locate the origins of Buddhism in the traditions of Hindu asceticism.

Hinduism is an extremely diverse religion, or perhaps a set of religions, in that it honors a great many gods, has an abundance of rituals, and several distinct paths to holiness, such as study, married sensuality, labor for the good of all and, of course, asceticism. Pictures of Indian mystics can show extremely emaciated men, shriveled up from years of intense fasting. It is said that the Buddha at the time of his enlightenment was so skinny that one could see all the vertebrae of his spine from looking at the front of his stomach alone. We are not surprised therefore to see Indian pictures of the Buddha as a slender man. We note that the Buddha gave up these extremes of asceticism, but he was still depicted as thinner than what many of us today are.

After the Buddha passed from this world, a number of schools of Buddhism developed, many of which are lost in the sands of time. Islamic invasions in the later centuries also reduced the number of Buddhist monks, whom the invaders called “bald idolaters,” and many temples were lost. The surviving Indian Buddhists came to be known as Theravada Buddhists. This tradition, in Sanskrit, “the way of the elders,” is perhaps the oldest and it emphasized the need for individual enlightenment. This required prayer, fasting and above all meditation. In this tradition the monks are seen as spiritually superior to others because they are further down the path to their own enlightenment. Indian Buddhism therefore emphasizes the image of the slender Buddha to show the importance of renunciation.

Theravada is probably the older of the two main traditions, but the largest is Mahayana Buddhism, which means “the Great Vehicle.” Mahayana taught that enlightenment was possible for ordinary people, and while it was hard to achieve, enlightenment was no longer the domain of the monks. Monasticism was very important, and the monks became the teachers of many. They lived in a Sanga, or monastery, and their life was often near the ordinary people. Mahayana Buddhism would develop into a number of sects, and it was able to absorb a great many gods and goddesses into its universe by identifying them as Bodhisattva, or enlightened souls who chose to return to earth to help us poor suffering rascals along the right path.

Around the time of Christ, Mahayana Buddhist monks made their way across the Himalaya mountains into Tibet and then into China. Here they faced a very different culture and set of religions. Traditional Chinese Taoism saw wealth as a blessing from heaven. Traditional Chinese Confucianism defined the best society as one which was ordered, prosperous and well fed. On the surface, this does not appear to be a fertile ground for Buddhism, but in fact it is a very adaptable religion.

With the Taoist tradition there a great many gods and spirits, who come in a variety of shapes and sizes. For example, there is Tsai Shen, the god of wealth, who is a stout gentleman riding on a tiger, and one should put his image on the east side of the house to attract honest wealth. There is also Cai Shen, the god of prosperity, who is a plump god with a happy face and is often depicted laughing. There are many other such examples, but if you are a Buddhist missionary in China and want to convert the locals, a scrawny Buddha is not going to get many believers. Under Chinese Mahayana we are not surprised to see that the enlightened one is shown a bit chubbier.

Gregory Elder, a Redlands resident, is a professor of history and humanities at Moreno Valley College and a Roman Catholic priest. This photo is from about 2017. 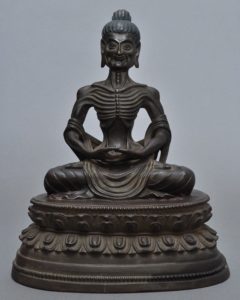