The monastery is named after Acharya Padmasambhava, who was born in Odisha and is believed to have spread Buddhism to Tibet in the 7th century
Paralakhemundi: Even though Lord Buddha had never stepped his foot in Odisha soil during his lifetime, the state has a rich heritage of Buddhism. In fact, Odisha is home to more than 200 Buddhist sites, scattered across its length and breadth.

Take an example of the ancient Padmasambhava Mahavihara monastery, situated in Jirang near Chandragiri in tribal-dominated Gajapati district. Reportedly, the height of the monastery is the highest in Eastern India.

The colony which houses the monastery is Buddha Vihar –the land of happiness and plenty— and the area is popularly known as a ‘mini Tibet’ in Odisha. It belongs to the Rigon Thubten Mindolling monastery that was part of the Tibetan settlement near Chandragiri. The monastery is named after Acharya Padmasambhava, who was born in Odisha and is believed to have spread Buddhism to Tibet in the 7th century.

Driving through the roads of Jirang, visitors are welcomed to the Buddha Vihar with Buddhist flags on both sides of the road. Inaugurated by Dalai Lama in 2010, it has been built as per the ‘Atanpuri style of Nalanda’ and in its assembly hall a 23-foot-high idol of Lord Buddha along with his two disciples has been installed.

On the right side of the Buddha’s idol is the 1000-armed and 1000-eyed Avalokiteswar. While on the left is the large idol of Guru Nangsi Zilnon. The five-storey monastery has its interiors richly decorated with traditional religious paintings of Tibetan culture. The 70-feet-high monastery can house over 200 Lamas.

Apparently, Jirang is considered one of the earliest Tibetan resettlement villages in the country; the Tibetans had arrived here May 1, 1963. Visitors can also experience maize cultivation in the village which is the main avocation of the Tibetans. Jirang can be approached by road through Berhampur.

There are several places in the state where Buddhism is still practiced today. According to the Buddhist scholars of Odisha from the Institute of Maritime and South East Asian Studies, Biraja (modern Jajpur) was a sacred land of Buddha Padmaprabha and the cradle of ‘Mahayana’.

The presence of ‘Mahayana’ antiquities, stupas and relics in Jajpur district are a testimony to this. Chinese traveller Hiuen Tsang visited these Buddhist sites in Odisha in the 7th century and between 8th and 10th century.

The tantric form of ‘Mahayana’ Buddhism started during this period only. One of the most popular Buddhist destinations in Odisha is the Diamond Triangle comprising Ratnagiri, Udayagiri and Lalitgiri in Jajpur district.

Notably, after the death of the Buddha, his followers were divided into two sects― ‘Hinayana’ and ‘Mahayana’. But now the latest Buddhist phase is ‘Vajrayana’ which is believed to have been originated from Odisha. 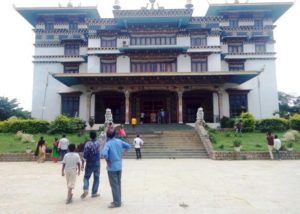