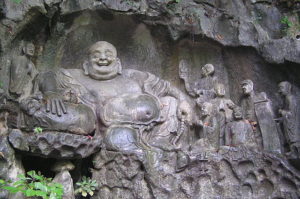 In Buddhist iconography there are many different Buddhas. Buddha is a title derived from a Sanskrit word that means “to awaken.” A Buddha is a being who has awakened from ignorance, in particular ignorance of the true nature of reality and of the self. In the Theravada Buddhism of southeast Asia there is only one Buddha for each world age, and for us that would be Gautama Buddha, the teacher who gave us the teachings called “Buddhism.” But in the schools of Buddhism in Tibet, China, and most of east Asia, there are a great many Buddhas who can be understood in many ways — as beings, as icons, as archetypes. In Buddhist art and literature the various Buddhas often represent different aspects of enlightenment.

To appreciate what Budai, the Laughing Buddha, represents, it’s helpful to know something about the history of China.
The End of the Tang Dynasty

The Laughing Buddha first appeared in 10th century China, in an interlude between two great dynasties, the Tang (618-907 CE) and the Song (960-1279). The Tang Dynasty is remembered as a golden age of Chinese civilization and culture. For a large part of it, the Chinese people enjoyed stable government, peace, and plenty. Then a major rebellion in the middle of the 8th century left the central imperial government in a weakened state. The later Tang emperors received less tax revenue from the provinces, which among other things meant there was less money to pay armies to protect the borders and keep the peace.

In the 9th century, the Emperor Wuzong faced an invasion from the west and needed funds for defense. In 843 he announced that all foreign religions within his borders were outlawed so that their lands and treasure could be confiscated by Wuzong’s government. This episode is called the Huichang fanan, or Huichang Persecution. The outlawed religions included Zoroastrianism, Nestorian Christianity, and Islam as well as Buddhism. But Buddhism had been the dominant religion in the Tang Dynasty up to that time, and there were a great many temples throughout China. Hundreds of monasteries were sacked and demolished. More than 260,000 monks and nuns were forced to return to lay life; some who resisted were killed. Gold was stripped from statues of Buddhas, and bronze temple bells were melted down to make coins. Wuzong died in 856, and the Huichang Persecution was ended soon after. Monks and nuns came out of hiding and began to rebuild their temples.

The Huichang Persecution was not only devastating to Buddhism, but it failed to bring back stability to China. Quite the opposite, in fact. Through the remainder of the 9th century, chaos piled on chaos. By the 870s gangs of bandits and rebels were defeating the empire’s mutinous armies. Warlords sacked and destroyed cities. It was reported that 120,000 people were massacred in the city of Guangzhou alone. By 904 even the imperial capital of Chang’an had collapsed into utter barbarity and was destroyed. The last emperor of the great Tang Dynasty was only 14 years old when he was forced to abdicate in 907. He was assassinated a year later
The Laughing Buddha Emerges

The last years of the Tang Dynasty, and those that came after, were years of grieving and hardship, of famine and destitution for many Chinese. And it was a time of reassessment and rebuilding. This period from the fall of the Tang Dynasty in 907 to the beginning of the Song Dynasty in 960 is called the time of Five Dynasties and Ten Kingdoms. The Five Dynasties were five brief regimes that rose and fell, one after another, in what is now northeast China. Southeast China was divided into Ten Kingdoms, which provided somewhat more stable, if fragmented, government.

Now the story of the Laughing Buddha focuses on a particular monk whose name was, or may have been, Qieci, also spelled Ch’i-t’zu. Qieci is the name recorded in the Song gaoseng zhuan, “Song biographies of eminent monks,” compiled in 988. Qieci was a Chan monk from the time of Five Dynasties and Ten Kingdoms. Chan is a school of Buddhism that developed in China and is better known in the West by its Japanese name, Zen.

Qieci was from Fenghua, in today’s Zhejiang Province on the south China coast.  It’s said Qieci lived on Mount Siming, which also is in Zhejiang Province. It’s also said he walked from town to town, carrying a walking stick on which was hung a hemp sack — or budai, in Chinese. He was an eccentric and cheerful fellow who lived by begging for food, and he kept leftovers in the hemp sack to give to the less fortunate. In time he was called Budai, after the sack. It’s said he could work small miracles and was especially good at predicting the weather. And he quickly passed into legend.
The Laughing Buddha as Maitreya

The legend of Budai tells us that just before he died, he revealed himself to be an emanation or manifestation of Maitreya. In Buddhist scriptures and iconography, Maitreya is the promised Buddha of the next world age who will appear in the world to teach the dharma when Gautama Buddha’s teachings have been forgotten. Until then he is a bodhisattva, an enlightened being who has vowed to remain in the world until all beings are enlightened.

The name Maitreya is taken from the Sanskrit maitri, loving kindness. In art, Maitreya has been depicted in many ways. The giant Leshan Buddha is a depiction of Maitreya, for example. Maitreya represents infinite benevolence. Just so, the Laughing Buddha represents happiness, generosity, and abundance. He is a protector of children as well as of the poor and the weak. And I think it’s significant that his story emerged from the terrible period immediately following the fall of the Tang Dynasty. His legend might be understood as a collective expression of the deepest hopes of a people who have known terrible things. The image of the Laughing Buddha — fat and joyous — was an antidote to a time of great sorrow and want.

The legend and image of Budai spread into Korea, where he is called Podae, and into Vietnam, where he is Bo Dai. He is Hotei in Japan, where he also became identified with one of the lucky gods of Shinto, just as he was incorporated into Chinese Daoism as a god of abundance. Most Buddhist temples in east Asia will have a statue of Budai, sometimes near the entrance, sometimes inside with his own altar. And, of course, you can find him on no end of kitschy knickknacks and the wall calendar of your local Chinese food carry-out. But now that you know who he is, I hope you will show him some respect.